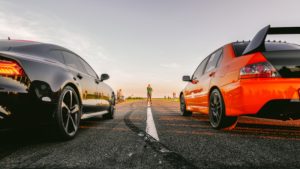 It’s no surprise to rational Californians that speeding, and especially street racing, are dangerous practices that threaten the lives of innocent Californians every day. The act of racing itself takes drivers’ attention away from the road and multiplies the danger to both participants and bystanders as a result. The legislature and municipalities across the state have enacted statutes that criminalize exhibitional street racing at a level above and beyond the traffic violations that are committed during a race. Although these laws have been designed to discourage street racing on California roads, they will never be completely successful. A local news report discusses a recent crash that was caused by street racing and left two people dead.

According to the facts discussed in the news report, a group of drivers were in south LA late last month cruising the streets and occasionally racing. During a short race, one of the drivers struck another on the side and sent the second vehicle off the road and into a pole. When authorities arrived on the scene, both occupants of the crashed vehicle were pronounced dead. The driver of the other vehicle did not stop at the scene of the crash and the article does not mention if they have been identified or apprehended.

Determining fault and liability for a crash can be difficult when the negligence of multiple parties contributes to the accident. If two or more drivers agree to participate in a street race, then they are partially assuming the risk of injury or death if the racing results in a crash. Under the law, however, it is not that simple, and negligent parties still may be able to recover damages from other negligent parties. California is what is known as a “comparative negligence” state. This means that an injured plaintiff can recover damages from a negligent defendant, no matter how much the plaintiff’s own conduct contributed to the injury. Under California’s system, a plaintiff is only entitled to recover a proportion of the total damages that reflects the defendant’s share of the blame for the crash. For example, a plaintiff who was 75% responsible for an accident with $100,000 in total damages, while the defendant was 25% responsible, could recover $25,000 from the defendant.

While California’s system is friendlier to plaintiffs than that of many other states, receiving fair compensation is not always a sure bet. It can be difficult to quantify fault and responsibility between two or more drivers and to reduce each driver’s share of the fault to a percentage. Skilled attorneys on either side of a case may be able to convince a judge or jury to allot significantly more fault to one party or another based on their arguments and persuasiveness.

Reach Out to an Experienced California Personal Injury Attorney Today