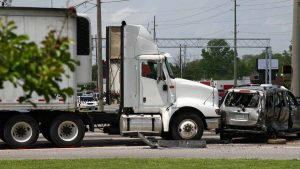 When trucks collide with passenger vehicles, the results can often be devastating. In fact, truck accidents remain one of the deadliest types of vehicle collisions because of the sheer force, weight, and size that trucks often have over passenger vehicles. The danger of these accidents is both in the initial impact but also in the potential injuries and property damage that often result from these crashes. In the most severe of collisions, truck accidents often result in significant physical injuries and even death.

According to a recent article, a local semi-truck accident left a van driver dead. The driver of the semi-truck rear-ended the van driver when he was stopped in one of the lanes of Highway 99. The force of the accident ejected the driver of the van from his vehicle, while the van slid into the right shoulder. The driver of the van was pronounced dead on the scene by local authorities. Initial reports from an investigation into the accident indicate that alcohol and drugs did not play a role in the crash, but police are still looking into the circumstances surrounding how the collision took place.

Unfortunately, in a state as large as California, it is no stranger to similar truck accidents. On average, California sees about 113 fatal truck crashes per year. Approximately 3,000 truck accidents take place annually in California where the parties involved are injured.

Although sometimes events that are simply beyond your control lead to an unexpected accident, proactive drivers can take a number of steps to avoid truck accidents when circumstances allow.

First, as a driver, it is important to allow more space between your vehicle and a truck than you would typically allocate for a passenger vehicle that is driving ahead of you. Following too closely behind a large truck can mean that if the truck stops or slows down suddenly, you could find yourself in an accident. Additional space allows you to swerve or change lanes quickly to avoid a crash.

Second, drivers should do their best to stay out of a truck’s blind spot. If you cannot see the truck driver’s face in the mirror of the truck, then the driver cannot see you. In addition, when passing a large truck, it is safer to pass on the driver’s side because truck drivers have a much more expansive blind spot on the passenger side.

Lastly, when a truck is turning, drivers should be extra cautious. Because large trucks need more space to turn than a passenger vehicles, it is important to give it more space and to account for higher speeds.

Do You Need a California Truck Accident Lawyer?

If you or someone you know was recently involved in a California truck accident, contact the lawyers at the Neumann Law Group. Our attorneys are committed to justice and will provide you with the support and expertise you need to proceed with your legal claim. To schedule a free initial consultation today, contact us at 800-525-6386.