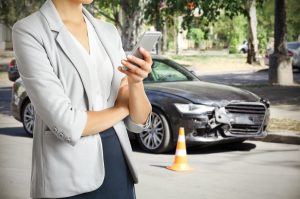 Following a California car accident, the customary thing to do is pull over and exchange information with the party or parties involved. Sometimes, however, the at-fault party flees the scene, which is against the law. When this happens, it is not only irresponsible and can leave anyone who was hit without redress from their insurer, who may deny the claim that arises from the accident.

According to a recent news report, a fatal car accident left three people dead after the at-fault driver fled the scene. A Mercedes and Kia collided, sending debris flying hundreds of feet across the road and igniting a small fire. Three individuals in the Kia were pronounced dead at the scene and have not yet been identified. By the time local authorities arrived, the driver and passenger of the Mercedes had fled the scene. The two individuals were later found at a hospital with moderate to serious injuries. Because California laws dictate that drivers have an obligation to stay on the scene following an accident, the driver could potentially face hit-and-run or vehicular manslaughter charges. The crash remains under investigation.

In California, there are laws in place that make it a crime to flee the scene of the accident without stopping and providing your information when the accident causes damage to other cars or property. California law categorizes these offenses as “misdemeanor hit and runs,” which could be punishable by up to six months in jail or a fine of up to $100,000. Drivers who commit these offenses could also be required to pay restitution to victims for property damage and receive two points on their California driving record.

Not all hit and run accidents in California are considered misdemeanors. If an accident only caused property damage, then the state can only file misdemeanor charges. If another person was injured or killed in the course of the accident, however, then the charge may become a felony hit and run instead.

Hit and run accidents present unique challenges for accident victims, on top of those you’d expect to face after any motor vehicle collision. Anyone injured in a California hit and run accident should reach out to a dedicated personal injury lawyer for immediate assistance.

If you or someone you know has been recently injured in a California car accident, contact the attorneys at the Neumann Law Group. We have represented clients in all types of personal injury-related cases over the years and will work to help you pursue the compensation you deserve. To schedule a free, confidential consultation today, contact us at 800-525-6386.