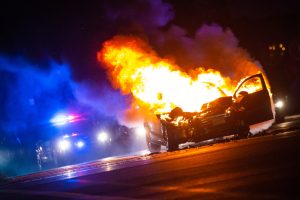 At times, the aftermath of an accident can be just as bad as the accident itself, as the moments after a car crash are often crucial for the wellbeing of a vehicle’s passengers. When a person is injured in part because of a driver’s negligence, even after the accident itself, that person can bring a lawsuit against the driver to recover damages for their injuries.

Recently, four men were injured in an accident on Old Redwood Highway caused by drunk driving. According to a local news report, the four men and the driver were all intoxicated when they were driving one evening around 10:00pm. The driver, unable to focus on the road, ran a stop sign, crashed into a wall on the side of the road, and caused the vehicle to roll over as a result.

A witness to the accident dialed 911 immediately, and emergency responders arrived at the scene within minutes. A police officer used a fire extinguisher to put out a small engine fire that was still burning, then he turned to assist the vehicle’s occupants. At that moment, the driver pulled himself out of the car and ran away.

According to California law, after a traffic accident, anyone involved in the crash is required to provide reasonable assistance to those who have been hurt. California Vehicle Code 20001 specifically says that “any driver of a vehicle involved in an accident resulting in injury or death to someone else shall immediately stop the vehicle at the scene of the accident and shall fulfill their legal requirements.” Importantly, one of these legal requirements is providing reasonable assistance to those who have been injured by the accident.

Because the law in California is clear that individuals involved in a car accident must provide assistance to others who might be injured, there is an opportunity for those involved in these kinds of incidents to sue for damages. After any kind of accident, injury victims or their loved ones should contact an attorney to discuss their options moving forward.

If you have been involved in a California car accident, the best thing you can do for yourself is hire a dedicated, knowledgeable attorney to help you navigate any possible legal claims moving forward. At the Neumann Law Group, we have over 200 years of combined experience, and we understand how jarring it is to be hurt in an accident caused by someone else’s reckless actions. Through all of the ups and downs that follow these incidents, we are committed to staying by your side. To learn more about the Neumann Law Group, and to schedule a free consultation, give us a call at 800-525-6386.