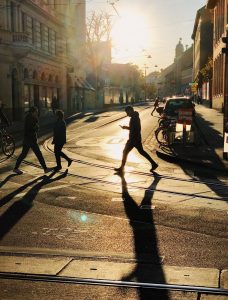 Law enforcement also trains personnel to reconstruct accidents from the physical evidence left after the accident, such as skid marks, debris fields, and even the location of blood or other biological material. From decades of examining accident scenes, as well as controlled experiments, a science has evolved by which conclusions can be drawn about the speed of the motor vehicle, the location of impact, and other surrounding circumstances based upon various clues.

After considering eyewitness accounts, surveillance footage, and the physical evidence at the scene, law enforcement will conclude whether the driver, the pedestrian, both, or neither are at fault for the accident. Typically, if a police report holds the driver accountable, the pedestrian will have a sufficient basis to make a claim for damages. However, law enforcement’s conclusions are not as simple as laying blame at one party’s feet. Sometimes, both parties share responsibility, or law enforcement reaches the wrong conclusion about who is at fault. Other times, law enforcement doesn’t respond to the accident at all, so no report is ever generated—this can happen where the pedestrian thinks they are uninjured and leaves the scene, only to realize after the adrenaline rush subsides, that they in-fact need medical attention.

For these reasons, the final decision about liability is made in a court of law, typically by a jury. Both the injured pedestrian and the driver—typically represented by their auto insurer’s legal counsel—present evidence, examine witnesses, and have experts testify to support their version of events. If the responding officer incorrectly said the pedestrian was responsible for the accident, it will take a considerable amount of persuading to convince a jury otherwise.

Another role of the jury is to apportion blame where both parties share some degree of fault. For instance, if the driver was speeding and texting, but the pedestrian didn’t use the crosswalk, while wearing dark clothing at night, both parties were negligent. In California, the jury evaluates the accident under the doctrine of “comparative negligence.” The jury will assign a percentage of fault to each party, and any award of damages will be proportional to the finding of comparative negligence. For instance, if a pedestrian is severely injured by an automobile, the jury could determine the appropriate compensation for the injuries was $1 million dollars. However, if the jury also though the pedestrian was 25% at-fault for the accident and the driver was 75% at fault, the pedestrian would only receive 75% of the damages award, or $750,000.

Because the injured pedestrian must establish the fault of the driver in order to win the lawsuit, it is crucial to have experienced legal counsel argue the case, especially If law enforcement determines the pedestrian is partly or entirely at-fault. If you or a loved one has been injured in an accident while walking, contact the experienced pedestrian accident attorneys at Neumann Law Group. Even if the police report states you were responsible, or even if the accident was never reported to law enforcement, our attorneys will evaluate your claim without charge. We will not charge a fee unless we win your case.