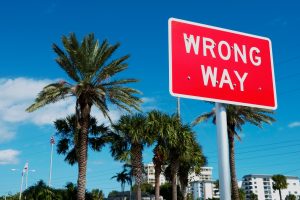 While California wrong-way accidents are not the most frequently occurring type of collision, they often result in the most severe injuries. Further, reports from the National Transportation Safety Board (NTSB) and AAA reveal that wrong-way driving accidents are climbing throughout the United States. Wrong-way accidents involve vehicles traveling in the wrong direction on a roadway. These accidents are often fatal because they typically involve a head-on collision. The severity of an accident largely depends on the crash dynamics, such as the speed of the vehicles, location of the accident, and contributing factors.

For example, recent news reports described a tragic California wrong-way accident. Two people suffered fatal injuries in a head-on collision involving a driver on the wrong side of the freeway. Several witnesses reported the wrong-way driver shortly before the 5:00 a.m. accident. The callers told 911 that the driver was driving at around 90 miles per hour in the wrong direction. Highway Patrol responded to the reports and discovered a head-on collision. Another vehicle suffered damage a short distance from the initial crash. The victims were 30 and 21 years old.

In reviewing the rate and circumstances surrounding these accidents, researchers concluded that these incidents typically involve eight similar factors. The leading causes of wrong-way car accidents are DUI, driver distraction, drugged driving, poor visibility, missing traffic signs, driver fatigue, construction zone confusion, and product defect. However, the researchers concluded that three factors stand out as most likely to result in a wrong-way accident. The researchers found that the likelihood of a wrong-way accident increased when a driver was under the influence of drugs or alcohol and was older and driving without a passenger.

Further, statistics show that nearly 400 individuals suffer fatalities in wrong-way collisions every year. Most of these accidents involve drivers between the ages of 20-19, and 75% of the at-fault drivers were under the influence of alcohol. Moreover, approximately 9% of wrong-way drivers had a conviction for impairment intoxication within three years of the accident. In addition to refraining from driving while intoxicated, the NTSB suggests that drivers more prone to fatigue and confusion have passengers present during longer trips. This may prevent the driver from falling asleep at the wheel.

Drivers who encounter a wrong-way vehicle should try to slow down and move to a shoulder safely. Wrong-way drivers can be unpredictable, and those around the negligent drive should try and remain alert. After an accident, injury victims or their loved ones should contact an attorney to discuss their rights and remedies.

Have You Been Involved in a California Wrong-Way Accident?

If you or someone you love has suffered injuries in a California car accident, you should contact the Neumann Law Group for immediate assistance. Our experienced attorneys handle California accidents involving motor vehicle accidents, premises liability, nursing home negligence, product liability, other injuries, and wrongful death. We provide our clients with respect, compassion, and individualized case strategies. Our clients have recovered significant amounts of compensation for our clients. Contact a highly skilled and dedicated attorney at 800-525-6386 to schedule a free initial consultation.